What Is Live Resin?

Live resin is one of the latest extracts that comes from living plants. It is getting more and more popular in the cannabis world. The taste is better than others and also more efficient to make. Live resin has a greater range of terpenes present in a live resin and it is more complex in taste.

What is live resin?

A cannabis concentrate’s texture or consistency is often described by its name: some are dense and brittle, such as shatter; others are waxy; some are heavy and viscous, similar to dough; and some are like sauces. Live resin is a much more supple concentrate, between wax and sauce. You can picture live resin as taffy, but not as wet as it.

Dark yellow is the most common color, but light yellow and white can also be seen in the market. Using a tool to dab is necessary because it is very sticky. The flavors and fragrances of the original plant are carried over into live resins, which are strong compared to other extracts with lots of THC.

How to make live resin?

In contrast to other forms of cannabis concentrate, live resin is made from fresh frozen cannabis plants that have been frozen immediately after cutting down. This type of extract did not go through the process of being dried, cured, or trimmed like the other plants are after harvesting. The process of curing and drying cannabis plants has a huge impact on the plant’s fragrances because trichomes that surround buds and cover buds contain terpenes.

It is likely to preserve trichomes in live resin by freezing the plant right away after harvest. Preserving terpenes during extraction is crucial because it keeps the plant’s original flavor and fragrance. Propane, Butane, or other solvent are used in the extract solvents process from frozen plants after harvesting.

Below are the process for making live resin after harvest:

The difference between cured resin and live resin

The difference between live resin and live rosin

Live resins are extracted using solvents including propane and butane, while live rosin is a solventless process. As their source material, both live resin and rosin are made from frozen cannabis plants. It is also possible to make simple resins and rosins using dried plants rather than frozen ones and to use solvent extraction methods or solventless extraction methods respectively.

The difference between Live resin and distillate

Unlike live resin, Distillate doesn’t make use of frozen plants for its source material. The distillate is an extract created by refining a resin. Processing Distillate often removes the terpenes and flavorful properties which some customers like. These products may not experience the same live resin flavor as before.

What are the benefits of live resin?

Live resin has a distinctive taste compared to other concentrates. It retains the original flavor of marijuana plants and can be potent because it preserves trichomes. Growers also save lots of time and money by producing live resin plants. They freeze the plants right after they harvest, which means they encounter less complicated processes like dehydrating, curing, and even taking care of the plants.

How to consume live resin?

Dabbing is a popular way for people to consume live resin. However, it will require some tools to consume.

When using a dab pen, make sure you use a dabber tool to transfer the live resin. You need to modify the temperature, press the switch, and inhale.

Live resin can also be added to a bowl, joint, or blunt for an extra kick.

Is live resin safe to consume?

You should always purchase products from a dispensary that is legally licensed when you want to access concentrates. The solvent must be removed and there are limits on how much they can contain. Live resin should be vaped or dabbed to consume instead of taking it directly. These types of concentrates are much more powerful than cannabis flowers. Consumers should use it sparingly.

How to keep live resin?

The best way to store live resin is in the refrigerator with an airtight box to keep its terpenes. Remember to prevent exposing the live resin to the air and heat, it will kill the flavor.

What is the cost?

Live resin is a new cannabis product that has recently popped up on the market. Live resin was charged more than $100 every gram a few years ago due to its rarity. Nowadays, you can find the price has been lower at the local dispensaries. The price of live resin now can range between $20 to $50 per gram.

What is the distinction between live resins?

Some live resins are very similar to jelly, sap, or sugar, whereas others are closer to waxes or sauces. The viscosity of live resin depends on the number of terpenes it contains, and myrcene and pinene usually have lighter terpenes. For instance, Live sugar easily breaks into small fragments and contains fewer terpenes.

After a product is extracted, it can be further altered mechanically, such as with sap whipped into butter to create different consistency.

Where did live resin start?

Live resin is comparably new to the cannabis world. Between 2011 to 2013 in Colorado, a team of extractors and growers began experimenting with different ways to extract from the plants.

Live resin was discovered by William Fenger, also known as Kind Bill, and EmoTek, the founder of Giddy Up. Together, they developed a BHO extractor that keeps it at a low temperature to make live resin. Using a scientific method, they were able to conserve terpenes, so they won’t lose their flavor and fragrance during extraction. 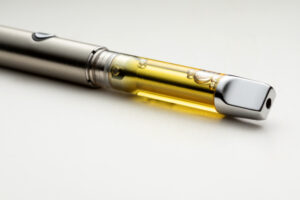 Live resin is a relatively new type of cannabis concentrate that is swiftly becoming very well-known. Although this kind of concentrate is more and more popular, many people are still uncertain of what exactly [...]

How Does Cannabis Flower: Step By Step

Any mistakes made during the flowering phase can certainly impact the quality and amount of your harvest. As a result, it is imperative to understand this step-by-step process to ensure that your harvest is [...]

Is Live Resin Better Than Rosin?

We can easily find more and more cannabis products with different varieties on the market since more states legalized using cannabis recreationally. Smoking from cannabis flower is still the most common way to consume [...]

Cannabis stores always have a new form that is completely apart from the previous one. In this article, we will focus on the characteristics of live resin and the differences compared with other concentrates [...]

Is a Live Resin High Better?

For a long time, the science of marijuana was neglected or put down to the dark corner since it wasn't legal or common for medical or recreational purposes. Since more and more States legalized [...]

Cannabis extract is a type of concentrate created by using a solvent such as ethanol, propane, butane, and CO2 (supercritical carbon dioxide). Concentrate and extract are used interchangeably. However, not every concentrate is considered [...]