What is the Difference Between Budder and Wax? 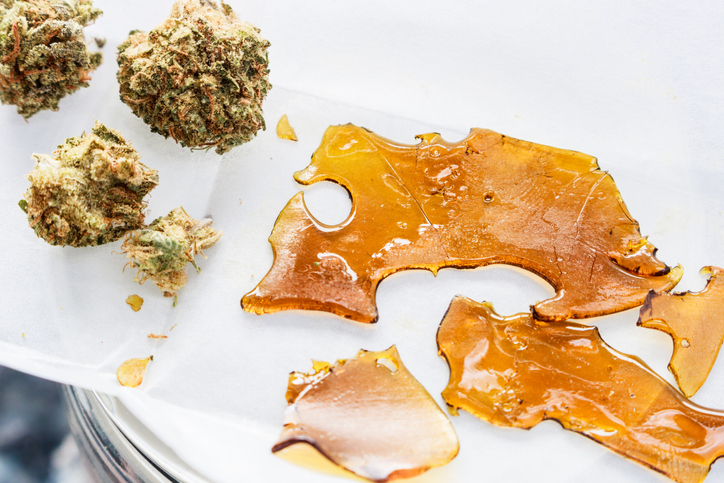 As we’re sure you’ve noticed, cannabis concentrates can cause confusion – say that three times fast! But don’t worry, we’re here to break down everything you need to know about cannabis budders, badders, waxes, and shatters.

What is the difference between budder and wax?

First off, the three B’s: badder, batter, and budder. Fun fact: badder and batter are the same thing, it just depends on a brand’s spelling preference. For the sake of this article, we’ll use the former spelling.

Simply, badder and budder are two terms used to describe the look, feel, and consistency of cannabis concentrates. Budder and badder are very similar in that they are both made with solvents (sometimes solventless rosin), but the consistency of each differs.

Badder looks more like a thick sauce, whereas budder is smoother and white-yellow in color, like butter (duh), or a creamy cake frosting (yum!). Both budder and wax concentrates are made using heat whilst whipping the concentrate, which incorporates air to evaporate the residual solvent.

Pro tip: Aggressive whipping may result in a drier, more crumbly wax, while a less intensive whip will result in a creamy budder. Waxes and budders can have percentages, perfumes, and flavor profiles identical to shatter or oil, which means the only significant difference is in their malleable texture.

Now that we’ve covered budder and batter, let’s talk wax and shatter. As mentioned above, wax is a drier, more crumbly concentrate than budder, but shatter – as the name suggests – has a glass-like consistency, which is known to crack when broken apart. Higher-quality wax tends to be golden and amber hued, making it a truly beautiful concentrate.

While it’s thought to be the most pure or potent extract, its show-stopping texture merely has to do with the extract’s molecules being less agitated during the production process. While shatter may be the more stunning extract, wax seems to be more reliable.

Cannabis wax is usually smoked using a dab rig, but can also be vaped. According to Weedmaps, cannabis wax is a better concentrate to dab with. It’s very user-friendly and easy to manipulate, unlike shatter, which easily breaks into unusable pieces. We like using wax because both novice dabbers and experts alike can find common ground when consuming together.

Let’s get a little science-y: Wax and budder are types of butane hash oil, which are made by packing marijuana buds and trimmings into tubes and then flooding them in butane. Butane is used as a solvent to extract the major cannabinoids and terpenes from buds and trimmings. The butane separates the resin (the good stuff!) from the raw plant material. After several steps of heating, condensation, and vacuum purging, the result is a sticky cannabis concentrate that cools and hardens into a waxy consistency – or in the case of budder – a creamy, smooth texture.

Even though cannabis budder and wax are both made using a whipping process, the main difference is how long they’re whipped for. If you whip the extract for long enough, you’ll come away with a drier, crumblier wax, but if you cut the whipping time in half, you’ll get a smooth and creamy budder. Even though their consistencies differ, they’re both extremely malleable concentrates that are easy to use with a dab tool.

Not sure how you use wax or budder? Try a dab rig! It can make it easier to use wax and cannabis budder while enabling you to activate the cannabinoids and terpenes properly. While a dab rig is most popular, there are myriad other ways to smoke both budder and wax.

Similar to a dab rig, you can use an oil rig, which allows the smoker to experience the effects almost immediately. Rigs are similar to bongs, but have been designed specifically with wax, budder, and other concentrates in mind.

An important reminder when smoking wax and budder is that they require significantly higher temperatures than regular flower to combust.

Steps to dab wax or budder:

Dab rigs are also available in electronic formats, making it easier to control and regulate the temperature.

If you’re not keen on using a rig, vaping wax is a great option – especially if you enjoy vaping flower. Because vaping requires higher temperatures than should be used for flower, it is recommended to avoid overheating. Hotter temperatures tend to produce vapors that taste a little harsh, while lower temperatures deliver gentle clouds of vapor with purer, smoother flavors.

Steps to vape wax or budder:

Pro tip: Cannabis budder and wax are quick to melt, so make sure your dab tool is at a low room temperature before you pick up your extract!

How Do You Use Budder?

There are two recommended ways to use budder. Cannabis concentrates are generally consumed using the same method: dabbing. Usually a dab is done using a dab rig, which looks very similar to your average bong, but it has one key difference. Instead of a bowl, a dab rig uses a nail and dome (also known as a banger), which are used to heat and vaporize your concentrate. Your vaporized concentrate travels through the rig, and can be inhaled in the same way as you would bud from a bong.

The second recommended method is to mix a very small amount of budder in with your flower, and enjoy as you normally would by rolling it into a joint or filling a bong. For those looking to try cannabis concentrates for the first time and don’t want to invest in a dab rig just yet, this might be a good option. It needs to be noted though, that only a tiny amount of budder is needed for this method, as it will increase the potency, as well as affect the way your cannabis burns.

Users have reported faster-acting and more intense sensations when using cannabis concentrates when compared to flowers. The same rule of thumb goes for cannabis budder as it would for any other cannabis products: start slow. Starting with a small amount and taking your time to gauge your tolerance is the safest way to start off with any type of cannabis. This is especially true if you’re unfamiliar with a product, method, or haven’t used a cannabis concentrate beforehand.

We hope this article was helpful for your next trip to the dispensary! Now you’ll know how to pick out the best wax, budder, badder, and shatter for all your dabbing needs. Tell us what your favorite cannabis extract is in the comments section below. Learn more about badder at https://www.drippextracts.com/collections/badder/.