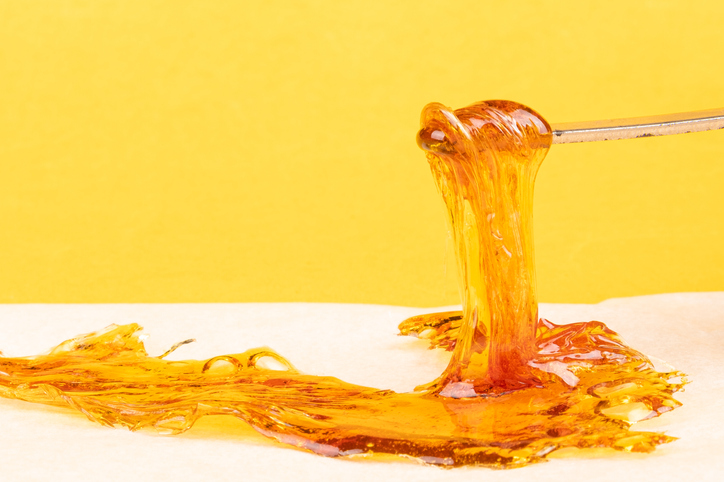 With the legalization of marijuana becoming more widespread across the country, more people are learning about the various forms it takes and the uses and benefits therein.  Much has changed since they began to legalize cannabis because once it was legalized, experimentation and refinement became more accessible to those who wished to explore the seemingly endless possibilities that this plant seems to have. Even compared to 30 years ago the strains alone have become more potent and a lot more accessible, but lately it’s becoming harder and harder to keep up with all of the new and different ways to enjoy our favorite plant. Regardless of if you are an old school user or newer to the world of marijuana and cannabis extracts, there’s always more to learn. For example, you may have come across the word “Shatter” at your local dispensary or heard it in conversation and wondered, what is shatter?

Shatter like many of its extract counterparts can be smoked via the dab-rig method. Very similar to a bong, a dab-rig is also a type of water pipe with which smoke can be inhaled. The dab-rig has a “nail” where you pack/place your cannabis extract, be it shatter or otherwise. Unlike a bongs “bowl” that can be lit with a lighter, the nail has to be heated with a hand torch or something similar in order to reach temperatures high enough to ignite the extract and vaporize the fumes into inhalable smoke. This smoke is then transported through the pipe into your mouthpiece and inhaled into your lungs where it gets absorbed into the body. Smoking cannabis extracts by way of the dab-rig is also referred to as a “dab” or “dabbing”.

Unlike other cannabis extracts that you can cook up in your kitchen, it is inadvisable to do the same for shatter or other extracts that are also made with butane or BHO (butane hash oil). This is because the use of butane is utilized in the process of shatter to help extract the essence of the plant. During the end of this process the butane is extremely flammable and can be incredibly dangerous to work with without the proper facilities. Many people working from home who have tried to produce shatter in their kitchens have caused accidental explosions on many different occasions and it just isn’t worth it.

Cannabis extracts contain higher concentrated doses of the essential compounds in cannabis and therefore are incredibly potent. Compared to smoking the flowers, extracts have been known to be in excess of 50%-60% more potent than the buds. Since this is the case, you don’t need to smoke nearly as much or as often to get the same dose you might otherwise. This can give your lungs more of a break from having to tolerate inhaling smoke on a more frequent basis while also using less extract to achieve more. You can also add a small amount of cannabis extract to a regular bowl to give it more of a kick, or even line a joint with “wax” another type of cannabis extract, to help seal the joint while also making it more potent in the process.

Wax, like shatter, is a cannabis extract that is used in much the same way. You can smoke it using a dab rig, or add it to regular marijuana to help enhance the properties altogether. The differences between the two come down to texture, consistency, and the ease with which they are used comes down to preference. Wax has as its name suggests, has a wax-like consistency and stickiness to it. This is good because it makes it easier to use it with precision when it comes to the amount you want to use and it has a good amount of malleability which can adapt it to most rigs and can also be used to line the edges of a joint. Shatter has more of a glasslike quality because the molecules were left undisturbed in the extract in the processing phase whereas with wax they became displaced and agitated. The molecules maintaining their integrity is what gives shatter its qualities, and is the primary difference between wax and shatter, and it is purely superficial. The consistencies of their forms and the differences therein don’t truly make a difference their effects, it just comes down to the individual dispensary and their test results for their own products.

The consistency of glass that shatter has has its pros and cons. It can break apart and crack in inconsistent fragments and this can be a pain sometimes to work with, but it is really interesting and beautiful to look at, much like stained glass. Some people can’t stand the sticky consistency of wax and prefer to do the little extra work to use shatter, whereas others don’t care to break it apart and would prefer to use the wax because it’s easier to place, so it truly comes down to preference and availability.

As more is researched and learned about cannabis and extracts we become increasingly aware of its effects, both good and bad, and are better equipped to refine it into something more and more beneficial to our society as a whole. Great strides have been made in the last decade alone and much more is to come in the future, the hardest part for us as users is to figure out which one we like the most that works best for us.